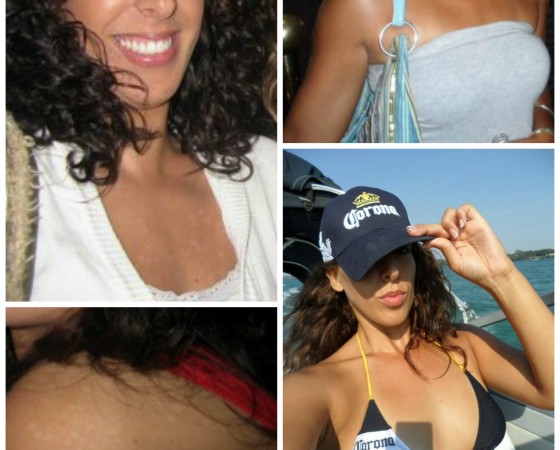 Notice the dots/spots on her skin in the two photographs on left.

And the clarity of her skin in the photos on the right.

When we were first introduced to GNM, we learned how much our thoughts control/affect body functions. However, when the dots/spots disappeared overnight by using the principles of GNM, it was still a surprise to us!!!

To make sense of how amazing this story really is, we need to go back to the beginning. What makes this healing so miraculous, is the fact that these spots were hereditary.

My husband had these same spots, as did our son, Rachel’s brother.  I  never had such spots, as neither intimacy or childbirth could ever pass them on to me.  Being hereditary, we thought the spots were a condition we could do nothing about. My husband had had them ever since I can remember. When the children were old enough to go outside in the sun, they too showed signs of the spots their father had.

Of course, we went to the doctor and asked what could be done. The doctor said that the spots were a form of fungus, and that our cure was to lather up with “Selsun Blue” every spring to kill the fungus. It would have to be repeated every year.

On hot summer days and trips to the beaches, my husband and children were reluctant to remove their shirts or even wear light-coloured clothing, as this revealed the unsightly spots.

So we followed the doctors instructions, which brought years of relief.

However, as my daughter grew older, Selsun blue was stopped being an option as it seemed to burn her skin and no longer gave the desired effect. As a young dating woman, she was frantic as the spots kept showing up.

Not long before, I had learned about ‘German New Medicine’. (GNM) She asked if this new approach to symptoms could help with her skin? It was worth a try.

Rachel already understood the 5 biological laws that we had discussed at length. We were both so intrigued with it’s down to earth, no nonsense concepts.

We found the answer to her skin spots hidden in the generation before her father! Yes, her grandfather!

In coming to Canada, he had left his pack, his clan, his family back in Italy. Separated from his family, he discarded his given family name, severing him from his past, and helping him fit in with this new country. It was a shameful thing for an Italian to give up his family name. This added to the pain of being a ‘refugee’ in a new land.

Getting in touch with this family history, resonated with Rachel. She realized her skin cells still held the issues of shame and family separation passed down from her grandfather.

Rachel woke up the next morning and all the spots were gone! The shame was gone!!! The inherited family separation issues were resolved.

As you can see in the pictures on the right, she no longer needs to hide her skin, which radiates confidence and clarity.